Hilo and Diesel have a strange job.

The dogs are members of Alberta’s Conservation K-9 Unit, where they seek out destructive aquatic invasive species that may be sneaking a ride over the border with the unwitting help of a boat owner. 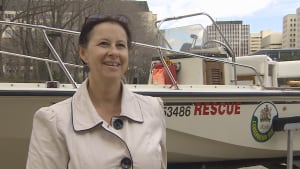 While it may be a job for the dogs, Bob Chrumka, the Chairman of the Eastern Irrigation District, says that the importance their work can’t be overlooked.

“Invasive mussels will have devastating effects if introduced into Alberta’s waterbodies,” he said.

“We realize that only by working together can we protect our water, and we are very proud to be able to help bring the Conservation K-9 Program to fruition.”

Out of those, the pups snagged 11 boats harbouring the harmful aquatic creatures. And while the boating season is just getting started this year, they’ve already found one mussel-infested boat in 2016. 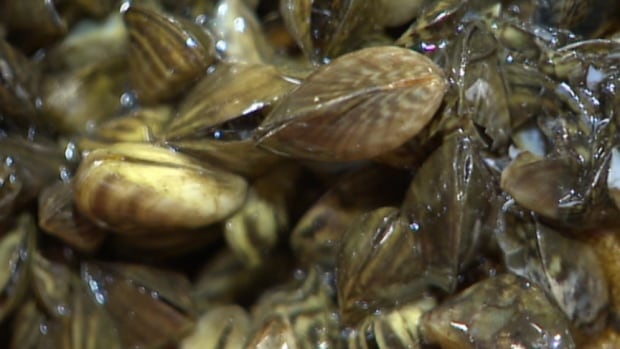 Zebra mussels are fingernail-sized freshwater molluscs that get attached to boats and can choke out native species. They can clog water intake pipes and machinery once they get established. (CBC)

Rescue dogs on the job

The two most common invasive species — zebra and quagga mussels — can live out of water for upwards of 30 days and once in, are difficult to eradicate.

Cindy Sawchuk, the operations lead for the invasive aquatic species program, said that the process for inspecting a boat for the hidden creatures is surprisingly simple.

“The dogs work all along the waterline where the mussels can be hidden, and they’ll display a passive alert if they detect the odor,” said Sawchuck.

“They’ll sit and then we, as handlers, will ask them to pinpoint it with their nose.”

The K-9 Conservation program actively seeks out high-energy dogs for the job. Many of the working dogs come from shelters or rescue agencies, where they have been overlooked due to their high spirits. 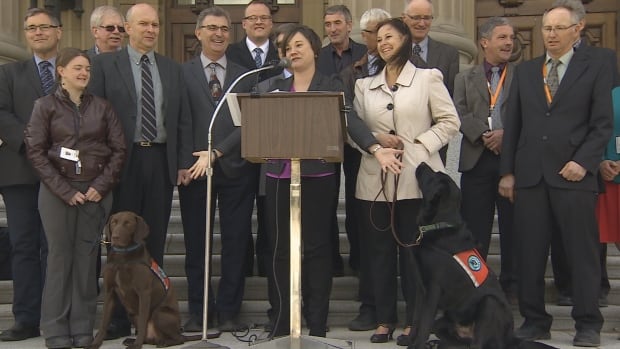 Shannon Phillips, the Minister of Parks and Environment, offers her thanks to the K-9 Conservation Unit. (CBC)

Hilo and Diesel, dragging their handlers along with them, visited the Alberta legislature on Wednesday to be commended for their hard work by Shannon Phillips, the Minister of Parks and Environment.

“On behalf of Albertans, I sincerely want to thank all our partners for helping lead the way in mussel detection in our province,” she said.

“Together, we have made the Conservation K-9 Program not only a reality but an extraordinary success.”

Should the invasive species ever manage to take hold in Alberta’s waterways, it could end up costing the province up to $75 million per year to deal with. Hilo, Diesel, and their comrades are one of our best defences against that happening.

Not too shabby for a couple of pups who learned to follow their nose.

All photos courtesy of CBC.